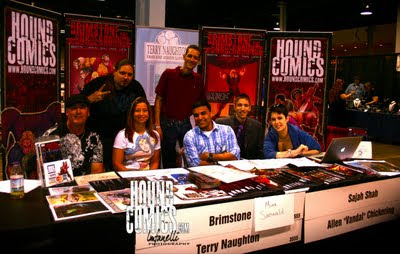 Okay Okay, i guess it's time i finally wrote about the most fantastic of fantastic convention so far on my Wizard World tour.

Fun does not even begin to describe all the fun I had. There were SO MANY PEOPLE. Fans of all shapes and sizes. Admittedly I didn't get to walk around much cause i was drawing at the Hound Comics table.

With me at the Table was Hounds lead artist Sajad Shah, Inker Allen Chickering, and, drum roll please, Former Disney animator Terry Naughton. This was the first time i was meeting the rest of the hound artist. They are a really really great group of guys. At first i was really intimidated. I mean who is going to pay attention to this little girl who only just broke into the comic book industry? i soon came to realize that we all had very very different styles of drawing and there for we each had a very distinct audience. For example Terry was popular with Disney and sports fans, Sajad was very popular with tradition comic fan and i was popular with video game and pop culture fans. These guys along with my boss Brimstone all looked out for me at the con. I really couldn't asked to be apart of a better team of guys. Thankyou guys!!!

For the first time ever at a con i could not keep track of the number of commissions I was doing. I felt like every time i looked up there was someone else to talk to and that lead to a new commission. I got to draw Kerrigan from Star Craft, Tinker Bell, Cheetara, Wonder Woman, Garrus, and some portraits to name a couple. Its always great to challenge my artistic skills with people commission. I get to draw things I wouldn't normally draw. It was totally kick ass!

On top of sharing a table with some of the coolest guys alive I was also asked to judge the costume contest. For those of you who know me very well, you know I was a very very enthusiastic cosplayer when i was a teenager. So When I was asked you can imagine how excited I was. There were more than 150 contestants in the cosplay, for some people that would be a bit scary. Not to me. I LOVE being in the spotlight. So Brimstone was the celebrity judge, Orlando was the costume profession judge and i was the artist judge. I was handed the mic and I introduced myself "Hi, I'm Mina Sanwald. Animator and Illustrator for Hound Comics. And I'm a former cosplayer" The crowd went crazy. They whistled and called me beautiful. I was really flattered. I never got that even when i did cosplay. What a rush.

The costumes were out of this world good. My favorite cosplayers were the Dragon Age guys. One was dressed as Alistair from DA Origins and the other Varric from DA2. Now everyone knows i'm a sucker for anything Bioware. They came up on stage a bickering back a forth just like in the game. Then Varric turned to me and said "Wanna feel my chest hair?" In case your not in the know thats an amusing conversation between Varric and Isabella in the game. I gave them triple million points for having great costumes and being in character.

Another particular cosplayer I remember was a girl dressed Commander Shepard in Normandy casual wear. Jarrett Crippen (The Defuser and the BEST MC ever for a cosplay) had a hard time telling who she was so I grabbed the mic and said with as much Gusto as i could muster "Commander Shepard!" She seemed to really get a kick out of it. She jumped up on stage rased her gun was yelled, "I'm Commander Shepard and this is my favorite store on the Citadel!" It was awesome.
I wish I could have picked more winners but there were only so many prizes.

Later both of the Bioware cosplayers dropped by to say hi. Commander Shepard was none other than great fanfiction writer xREBEL666x here on DA. She is a super super sweet lady who is very dedicated her her craft. I recommend you check her out. The Man behind the Alistair costume was mrbob0822 and Varric was Kemporer both of DA. It was sooooooo cool meeting you guys!

For all you guys who dropped by and said "Hi" Thanks it really meant a lot to me. Also for everyone I got to meet (You know who you are) big hug!

So i think thats it for now. If you want to see some videos of the trip and pictures check out my Blog. Also keep an eye out, I'm going to opening up for commissions on site soon as well as selling prints online.

I'll see you at the next convention. I'm scheduled to appear at ComiCONN Comic Book Convention in Connecticut this Saturday (08/27/2011) I'll be taking commission and selling prints as always. see you there!